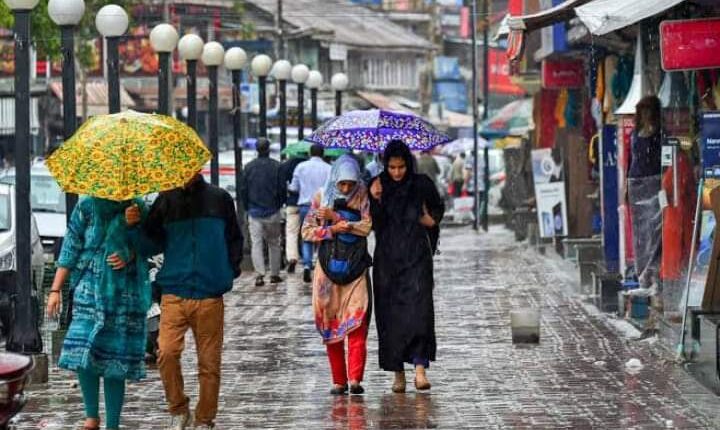 Rainfall forecast has been issued in Uttar Pradesh, Haryana, Punjab, Rajasthan and Madhya Pradesh including the capital Delhi. Along with this, the process of snowfall will continue in the hilly states. Rapid weather changes will be seen in North India. An alert has been issued regarding Bihar and Uttar Pradesh.

IMD Alert, Today Weather Update: Changes are being seen in the weather of the country every moment. It has started raining in many states. The weather is about to change soon. The hill state is witnessing heavy snowfall. Meanwhile, rain has been seen in areas of Uttar Pradesh, Delhi, Haryana, Punjab. The process of rain will continue in the next 3 days.

Changes in the weather will also be seen in the capital Delhi. There will be relief from cold wave in the plains of North India. Although snowfall will start on the mountains. Along with this, the possibility of rain has also been expressed in the plains before January 26. According to the Meteorological Department, heavy snowfall has been seen in many areas including Shimla. Western Disturbance has been activated. Due to which there will be a big change in the weather of the country till January 28.

Rain in the capital Delhi for the next 1 week

Rain has been seen in many districts of Uttar Pradesh in the last 24 hours. Along with this, moderate rain and drizzle will continue in different parts till January 28. The process of rain continued in Amethi, Ambedkar Nagar and Sultanpur including Lucknow, Ayodhya. There is hail in Gonda as well. Along with this, the rainy season will continue till January 27. Moderate rain will be seen in many areas. Along with this, the weather will be colder due to hailstorm. According to the meteorologist, Western Disturbance is active over North Pakistan. It is affecting Rajasthan. Due to which the east wind is also blowing from the Bay of Bengal. In such a situation, the process of changing the weather will continue in Uttar Pradesh. After January 28, the people of Uttar Pradesh can get some relief from the cold.

Heavy snowfall in the mountains

According to the Meteorological Department, with the activation of Western Disturbance, snowfall has intensified in the hilly areas. Heavy snowfall was observed in the valleys of Munsiyari and Dharchula in Uttarakhand. Along with this, heavy snowfall has also been seen in Bijli Dhar Kala Muni and Giri Munsiyari. Here, heavy snowfall has also been seen in Gilgit, Baltistan Muzaffarabad and Jammu and Kashmir. Due to snowfall in Himachal, Lahaul district has been cut off from Kullu while traffic has come to a standstill in Shimla. Flights have been stopped from Gaggal airport. Heavy snowfall continues in Uttarakhand. At present, the process of snowfall will continue in the areas for 5 days. Rain has also been predicted in some areas.

Weather warning of fall and rain in Rajasthan

With the drop in temperature, Pilani recorded a minimum temperature of 3.9 degree Celsius, which was earlier recorded at 4.6 degree Celsius. The process of rain will continue in Rajasthan for 3 days. The minimum temperature recorded at Mount Abu is 0°C. The temperature will continue to drop in Bundi, Bikaner, Udaipur, Chittorgarh, Kota. The sky will be cloudy in Jhunjhunu, Hanumangarh, Ganganagar and Bharatpur divisions. Rain can be seen at some places. Along with this, an alert has been issued for drizzle. A cold wave has been forecast for Bikaner, Hanumangarh on January 26. The wind will blow at a speed of 15 to 25 kilometers per hour.

According to the Meteorological Department, dense fog will be seen in Assam including Meghalaya, Manipur, Tripura, Arunachal Pradesh till January 26. Rain can also be seen in the areas. People have been advised to be alert for landslides. Along with this, forecast of cold wave has also been issued in some areas of Assam and Meghalaya.

Latest Weather Update For Kashmir for Next 24hrs

Moderate To Heavy Snowfall Likely In J&K On This Date